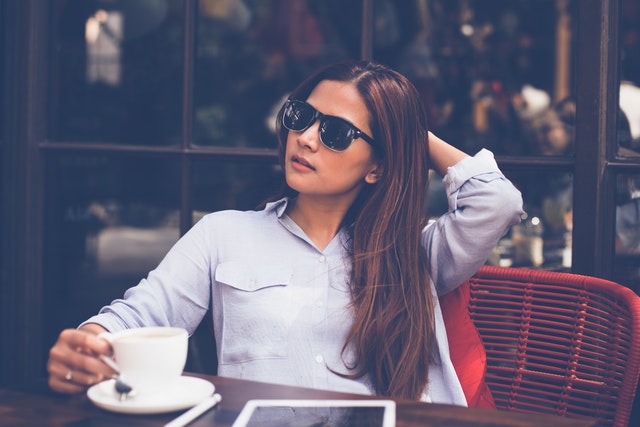 When our people-pleasing, romantic hopes get in the way of ending it.

One of my clients met a guy online. When she met him in person, he was at least fifty pounds overweight. She said, “Hi, I’m sorry, but you deceived me with your photos. Have a good evening.” And she left. She told me her time was valuable, and she wasn’t going to spend time with someone who lied to her. The weight wasn’t an issue, but his deception was.

Would you do that?

So many modern women struggle with leaving a bad date for all kinds of reasons. Whatever your opinion is of the recent Aziz Ansari scandal, I do think The Atlantic writer Caitlin Flanagan—a woman from an older generation—has a solid point when she describes the narrative women used to be taught on how to end a bad date:

Of course, what she’s describing here is a far more distressing situation than misleading a woman in your online profile. But her piece begs the question: Why do so many modern women struggle to leave bad dates? And more importantly, what can they do instead?

So Many Modern Women Are Conflicted

Of course, there are many women who have zero issues leaving a date before it even starts (see my resolute client, above). However, there’s a growing number of women who still struggle leaving dead-end dates. Some tell me it’s because they’re a self-proclaimed “people pleaser” and put others first before themselves, to a detrimental degree. Others just don’t want to be rude or impolite or have a hard time speaking up for their needs. Some women are so empathetic and want guys—yes, even boring, semi-offensive curmudgeons—to feel valued and happy, even at their emotional expense. After all, they don’t want to seem rude or ungracious.

Or sometimes, they believe the narrative that if they continue to hang out with this guy and put up with the bad behavior, he’ll change, and they’ll find love.

Sure, I often tell my clients that true attraction can take time to develop. Yet, it’s one thing if he’s nervous and not giving the best impression—but it’s another if he makes tasteless comments, inappropriate sexual advances, can’t stop talking about his ex, shows up drunk, or is clearly racist or sexist. Or simply, if you intuitively know from the get-go he’s just not for you.

It’s OK. Bad dates happen, but it’s imperative that you do not find yourself in a habit of devoting a lot of time to them, even if you’re genuinely concerned about your date’s feelings. Not only does this waste your time (and his), it can escalate dating burnout or, even worse, put you in dangerous situations, especially if you already struggle with saying no.

You don’t have to feel bad if you feel disappointment that your date didn’t meet your expectations. You can still end a bad date in a classy way. Here are nine ways to do so:

You don’t have to invest a lot of time or commitment for the first meeting. This person is a stranger, so you don’t know if they’re emotionally stable. If a guy asks if you’d like to do dinner or a concert, say you’d prefer drinks or coffee—and plan something time-sensitive afterward immediately. You can even prep your date ahead of time by telling him that you can meet for happy hour because then you have dinner plans with friends. Or keep it to coffee, and then say you still have some work to catch up on or a hair appointment.

Speak up for what makes you feel more comfortable so that you’re not feeling bad or guilty when there’s no connection.

You may really want that second glass of wine, but having a second round can signal to a guy that you’re enjoying his company. If you 100 percent know you don’t want to see him again, have only one. If you’re a sensitive person, you may have to challenge your beliefs that if you only have one drink, the date will be too short. Nurse your drink or tell him that you’re not a big drinker or still have work or something to do when you get home and don’t want to be tipsy—but really, a simple “no, thank you” should be enough.

This can also send the message that you’re not interested—a sign that you clearly want things to be separate moving forward. Unless the guy was a total jerk, and you need to leave immediately, try to pay for your half to make it clear that no one “owes” anyone anything.

Instead of using an excuse, be honest and say it was nice meeting him, but you’re ready to call it a night. Depending on the situation, you may want to tell him why. If he seems emotionally stable but can’t stop talking about his ex, for instance, you can let him know that he wasted your time because it’s clear he’s not over her yet. But use your best judgment as to whether you want to engage in constructive criticism—remember, you’re not his counselor.

05. Excuse yourself to the restroom.

If you’re worried about being rude, chances are you’re not going to be checking your phone on the date. Excuse yourself to the restroom, and when you come back, say that you just got a call from your friend that she got dumped and you need to be with her. I’m not a fan of deception, so try to only use this when a guy makes you uncomfortable.

Some bad dates can be downright scary. Apps such as uSafeUS and Circle of 6 not only help you contact your friends in instances where you feel unsafe, but they also put you in touch with resources to help you.

If for whatever reason you feel uncomfortable or unsafe, tell the bartender or a waitstaff member. They can walk by the table or your area of the bar more frequently to make sure you’re OK.

Sometimes it’s automatic to say “See you again” or “See you later” at the end of a goodbye. If you have no plans to see him again, say something like, “It was nice meeting you. Have a good night.” If he texts to ask you out on another date, be polite and say, “I had a nice time, but I don’t think we’re a match. Good luck.”

Sure, the date did not end well. Maybe you don’t have a romantic connection, but could this person grow into a friendly acquaintance or friend? Be curious—you never know, he may be an interesting person even if you’re not attracted to him. If, on the other hand, you really would never want to see this person again, pat yourself on the back, and take pride in the fact that you were able to walk away—saving yourself time and, just as importantly, your emotions.

*As seen on Verily