Some couples are guilty of this “cringe-worthy” pattern—are you?

I’ve been a couples therapist for over 16 years, and there’s one particular communication pattern that makes me cringe every time I witness it with my clients. Lucky for you, Season 3’s Netflix’s Love Is Blind will give you a front-row view.

Partner A says they’ll do something or fulfill a request by Partner B. But as Partner A takes action, Partner B will be critical, controlling, and sometimes even take over. This was made evident between Zanab and Cole during the fish cooking incident. Now, I know this is a snapshot in time, it’s a teachable moment—and it’s so important. (Pst, it’s in Episode 9, starting at 40:10, in case you want to watch it.)

Note the stuff in italics are my comments. The rest is the play-by-play.

Cole says, “Good enough,” as he finishes chopping the sweet potatoes and tells the brussel sprouts to, “Make me proud,” as he throws them in the oven.Now, let’s pause here. Just by his language (“good enough!”, we can see that he’s laid back about cooking. He doesn’t stress. He’s not a perfectionist. And he’s generally optimistic everything will turn out alright. (“Make me proud!”)

Now Zanab walks in the door, and they greet each other. This was a positive. Highly recommend doing a greeting ritual when you come home.

Zanab: I’m excited you’re finally cooking for me. You said you were going to for so long. Oh, no — passive-aggressive here.

Cole: It’s the effort that counts.Optimistic again. He tries to highlight a positive.

Cole then pours the white wine. 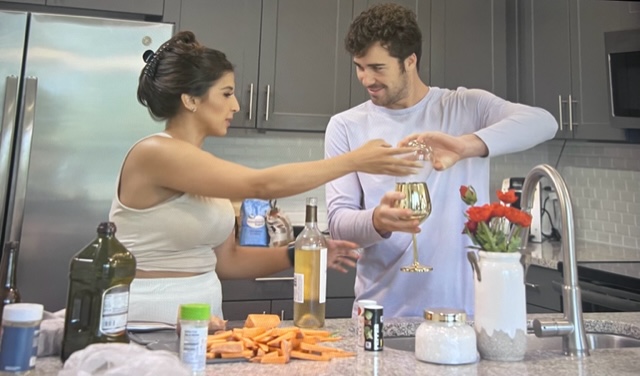 Cole’s response: I’m a sophisticated man after all these lessons on wine. Hmm, Zanab isn’t exactly doling out praise or thankfulness. Fun fact: I checked with a wine expert, and Zanab isn’t entirely right, and Cole isn’t wholly wrong. Holding a glass by the stem does prevent the wine from warming, but with a stemless glass, you can hold the glass above the wine. So, just a little incident that reminds me that both partners have valid perspectives and reasons for doing what they do.

Cole: Yeah, we’ll eat them after everything. That’s how I always do it. Cole explains his reasoning and his preference for the dinner he is making.

Zanab: Why don’t you use tongs or something? By itself, it might sound like a suggestion, but with everything said so far, it feels more like criticism, doesn’t it?

She then pushes him out of the way where the chicken is cooking on the stovetop (controlling) and says, Why aren’t you holding it where the raw bit is? Again, criticism!

Cole: You’ve been hired. He tries to diffuse with humor. This could have been an opportunity for him to tell her to relax. He’s stepping back, fearing more criticism.

Z: This was meant for you to be cooking for me, babe. So, then, why don’t you let him cook? This is a prime opportunity for her to butt out and let him cook the way he’s been cooking before he met her.

Z: This is a very white, not seasoned piece of chicken. Please season it. Criticism.

He tries to season it, and she says, “We don’t need any more on this side.” It feels like he can’t win, doesn’t it? He follows her direction, but it appears not even that is good enough for her standards. I see this all the time with my couples.

They have an interaction with a Nerf gun. Cole hits one at her, and she responds with: What is wrong with you? Criticism. (Side note: On one of Cole’s IG posts he writes: I want someone who appreciates me being crazy and weird, not someone who wants to ‘tone it down.’” He’s definitely not getting appreciation or acceptance from Zanab here.)

Cole asks if she’s mad and says, “You don’t know how to have fun. I want you to be less bratty.” Cole has had enough. Now, he is now matching criticism for criticism.

(To the camera) Cole: It just seems like I’m getting two different versions of Zanab.

Between Zanab and Cole, they discuss what just happened, and Cole shares: I can’t even spill chicken without you thinking I’m immature or something. We can’t get past 20 minutes together without some kind of a trip wire…I don’t feel good about this in this moment. This is what happens when you get criticism after criticism directed at you.

Zanab: You’re going to spill chicken. Chicken isn’t a deal breaker for me. Zanab misses the point. It’s not about the chicken! Cole tries to explain:

Cole: It’s the way that we relate. I want a wife who laughs with me and builds me up and isn’t pissed and ticked and perturbed by every little thing that happens that isn’t ideal. Zanab made so many critical comments in such a short amount of time that Cole’s feelings here are understandable. Happy couples do build each other up. He goes on to add:

Cole: I would expect my wife to like me a little bit more, I guess.

Z: How can you think I don’t like you?

Cole pointed toward the kitchen and what happened and said, “There’s just moments.”

Zanab asks what she needs to show him that she likes him.

Cole: To not feel like I’m inferior. Cole feels that Zanab is expressing contempt—which is the most dangerous of Gottman’s Four Horsemen.

Z: I have never thought that of you. Ever. Perhaps she may not believe it—but her behaviors show otherwise. Cole adds that he feels like she puts him down every day. This is the consequence of critical comments. He likely thinks that he’s walking on eggshells, can’t do anything right, and is constantly under a microscope. What usually happens is that the person gives up because they don’t see the point. With all the critical comments and then her taking over the cooking—why would Cole want to cook for her again?

So, now that we’ve walked through that cringeworthy interaction, I want to address one of Cole’s comments that he said in the heat of the moment while he tried to defend himself amid criticism.

If you want a relationship to work, you have to accept that your partner is never—and I do mean never—going to do things precisely as you would do them. Instead of thinking of these approaches as “wrong,” just think of them as “different.” Perhaps you grew up in a home that showed loved through criticism—it never felt too good, did it? Well, try not to show it in your relationships, either. Instead, focus on your partner’s intention and effort into your relationship. Don’t try to change their methods.